I have just started presenting at schools again and have updated my talks to cover what we know about the tragic deaths of a number of young people who died at music festivals over the summer. To be truthful, we don’t know a lot … It takes quite some time for the toxicology results and the actual ’cause of death’ to be released for each case and, as far as I am aware, family members can ask for the findings not to be released publicly. By the time we find out what happened (if we ever do), the results often attract little attention. Realistically, the faster we get this information, the quicker we can feed it back to users or potential users so that they can make more informed decisions and this has never been more important after what I have been hearing from young people in the last couple of weeks.

In my Year 12 presentation I present data from the UK and Europe highlighting the dramatic increase in the purity of MDMA (the substance you want when you take ecstasy). I show some of the warnings that have been disseminated by extremely reliable and credible agencies about so-called ‘super-strength’ ecstasy (pills containing 250mgs, 330mgs and one of 394mgs of MDMA). To get an ‘ecstasy effect’ an average male needs around 110mgs, a female slightly less. Take too much MDMA and you will overdose (i.e., ‘over the dose’ – be more likely to experience adverse effects and in extreme cases, a fatal overdose is possible). At a recent presentation a young woman had a panic attack as I presented some of the purity data and what it meant. When we spoke afterwards, with the school nurse sitting next to her, this is how she explained why she had had that reaction:

“My boyfriend never has any less than 8 or 9 caps on a Saturday night! I have told him to be careful and we talked about the deaths but he says he’ll be fine because he tests all his drugs before he takes them and they’re MDMA. He and all of his friends say MDMA is completely safe as long as it’s pure and not ‘cut’ with other stuff.”

Her boyfriend is 17-years-old! Another girl asked if she could take a photo of one of my slides and message it to some of the guys she knew. She did and then within minutes got a couple of replies basically saying that it was all scare tactics and I didn’t know what I was talking about. It’s only been just over one week and the number of emails and messages I’ve had from young people (both male and female) who have heard my talk asking me to send them copies of certain slides so they can share the information with others is quite staggering. Once again, the consistent message from these teens is that their friends believed that as long as it was MDMA that they were taking, it was safe. Terrifying! Now, it is important to acknowledge that MDMA is not as toxic as many other substances that can be found in a pill, capsule, crystal or powder but even the site that sells the DIY testing kits makes it clear that it is not ‘safe’, stating the following:

“… even pharmaceutical-grade MDMA taken at moderate doses in optimal conditions is not a wholly benign drug. The problem isn’t (just) the toxic adulterants used by dance-floor pharmacologists or the botched syntheses of bathtub chemists.”

According to the latest Australian Secondary School Students’ Alcohol and Other Drug (ASSAD) study, however, ecstasy use is still relatively rare, with 3.1% of 12-17 year-olds reporting ever using the drug. That said, there are a small, but significant number of senior students who are taking ecstasy/MDMA and from what I can tell they are doing some dangerous stuff … When you look at the ASSAD data more closely you can see that there are around one in ten (9.2%) of 17-year-old males reporting they have ever taken ecstasy, and for females of the same age it is around one in 20 (4.7%). That’s a sizeable chunk of a year-group and it’s clear from the conversations I’m having with young people and the messages I’m receiving, these teens regard ‘taking a couple of pills or caps’ on a Saturday night as just ‘what you do’. This ‘normalization’ of ecstasy use amongst young teens, combined with the belief that ‘as long as it’s MDMA, it’s safe’ is scary … 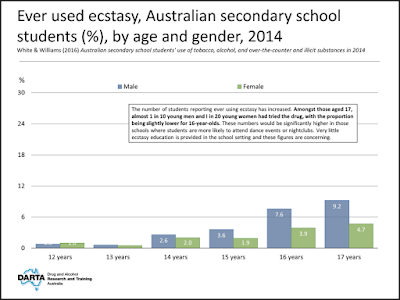 I’ve written about this before but after the week I’ve had (and what I’m expecting to come moving forward), I think it’s worth repeating.

Ecstasy is the street-term for a substance called MDMA (methylenedioxy-methamphetamine). Available in pills, capsules, powder and now crystal form, it is a notoriously impure drug with users never really being sure what they’re actually taking. MDMA is a difficult drug to make and as such other drugs are often substituted during the manufacturing process, some of which can be far more toxic than MDMA itself. During the 90s, many ecstasy-related deaths  occurred at events and were linked to environmental factors such as overheating or dehydration. We then started to see an increasing number of deaths due to adulterants, particularly so-called ‘synthetic drugs. Recently new processes have been developed and, as a result, we have seen a dramatic increase in MDMA quality across the world. As already said, this increased purity has led to an increasing number of MDMA-related fatalities across the world.

Without going into the science of the drug and its effects in any great detail, MDMA essentially ‘tricks’ your brain into releasing large amounts of serotonin (the brain’s ‘feel-good’ transmitter). Our brains release small amounts of serotonin everyday, each time we laugh or something good happens to us – when MDMA is taken, much larger amounts are released and the ‘reuptake’ of this chemical is blocked resulting in serotonin staying in the brain for much longer and the user feeling good for a number of hours …

Unfortunately, young people are provided very little quality information on ecstasy and rely on not always the most reliable sources when making choices around this drug. In fact, in a study I was involved with many years ago now, when asked where did ecstasy users source information about their drug of choice, friends were the most likely (82%), with dealers (61%) and the Internet (45%) following. What is provided to them through school-based drug education programs or government mass media campaigns is often regarded as unbalanced, ‘propaganda’ that focuses on possible, but less likely outcomes such as death.

Of course, it is unreasonable to expect most parents to be ‘experts’ on drugs like ecstasy (and if you tried to sell yourself as one to your teen they are likely to laugh in your face) but here are 5 simple messages that could and should be conveyed if the opportunity arises. I totally get that the first two may be difficult for some parents to discuss, particularly with a teen who has carried out a little research on the topic and may try to bamboozle you with what they have read or heard from others – but the final three are not complex and can easily be handled by even the most drug-naïve parent:

As I have said, I get that the first two may be difficult, particularly if the whole illicit drug scene is completely alien to you, but the final three are not hard. Finding the opportunity to discuss this issue can be challenging but to be honest, with all the media coverage around the deaths that have occurred, as well as the drug detection dog operations and subsequent arrests, starting a conversation about ecstasy/MDMA and your concerns can be much easier than you think.

Just one word of warning however – if you do discover your son or daughter is using ecstasy, don’t start the discussion with your fears about death … As already said, ecstasy deaths are rare and you can almost guarantee that it is not part of your child’s experience if they are taking the drug or hanging out with friends who do …Of course, you need to express your concerns and fears for their safety but if you only go down the ‘death’ discussion you will undoubtedly lose them pretty quickly. The truth is that their experience is usually overwhelmingly positive (and most of them certainly do not know anyone who has died after using this drug), acknowledge why they have made the decision to use it (you certainly don’t have to be happy about it!) and then discuss the points above.

Do I believe that this will stop them taking the drug? Most probably not, but it certainly makes it very clear to your son or daughter how you feel about the situation and proves to them that this is not a ‘knee-jerk’ response from a hysterical parent but rather an educated discussion with someone who loves them very much and wants them to be as safe as possible …

About the Author: admin

"Coca-droppers.com is not responsible for any misuse of the products" Dismiss